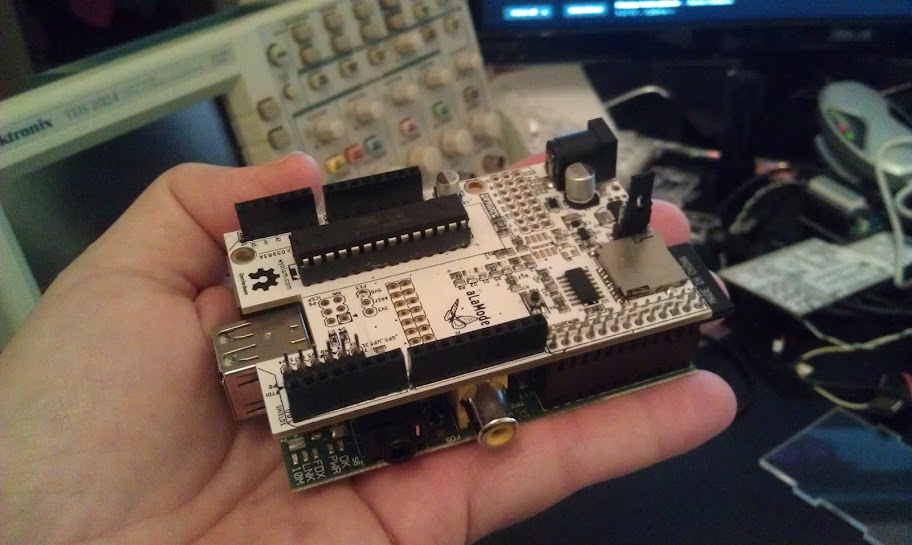 Our first prototypes are back, and working quite well! SeeedStudio fabricated the prototype boards and quickly sourced the parts.  The boards were of excellent quality. We ran into a few hiccups along they way, but Seeed Studio took care of them right away, and rushed to make up time.

If you haven’t been following, Anool Mahidharia, Justin Shaw and I from the Wyolum.com OSHW collaborative have been developing a stackable Arduino compatible for the Raspberry Pi.

While there are lots of emerging examples of interfacing hardware to the Pi, it’s just not as easy as the Arduino, and the Arduino already has hundreds of libraries for interfacing with motors, sensors, and displays. While you can always plug an Arduino into the USB port, but it’s not as neat and embed-able as a a GPIO interfaced board. You can write a program on the Pi in any language you want to control or monitor your Arduino application, making Internet integration and control super easy. In addition you can even program the AlaMode directly from the Pi.

Here are the features including a few extra goodies:

We’re in limited Beta right now, but as soon as it’s thoroughly tested, we hope to produce them for sale as soon as we can!