Charlotte, Mason and I hopped into Cambridge last Friday for the Mini Maker Faire at the Cambridge Science Festival. They helped me set up a table to introduce DuckyBots! to the attendees. We had probably close to 500 kids (and a few adults) making ducky bots in the 4 hours of the Faire, and almost got into trouble because people didn’t want to stop. We were the last ones to shut down. An unqualified success! (more details after the picture)

The idea for duckybots started from a conversation at the Boston Robotics Meetup with Meredith Garniss.  In addition to trying to involve kids in robotics, we thought it would be good to inspire the adult robotics crew to create for kids.

Programs like FIRST robotics, and school programs are already full of people interested in STEM and robotics, and we wanted to find something that would turn kids on to the joys of Science and Engineering.

The basic idea is to use turning rubber ducks into robots as a platform for experimentation, creativity and learning.
We thought we could apply this at many ages and levels. Really young kids can exercise their creativity by decorating ducks (drawing, gluing on.)

The middle level would concentrate on mechanical physics, making ducks move, maybe racing (but also have to offer non-competitive challenges for kids scared of  competition.)

To keep the ideas coming in, we can also have an advanced level, perhaps Sumo ducks (on water!)

For their first appearance, I needed an activity that could be be done by hundreds of kids in a short period of time, so I focused on “making them Move” 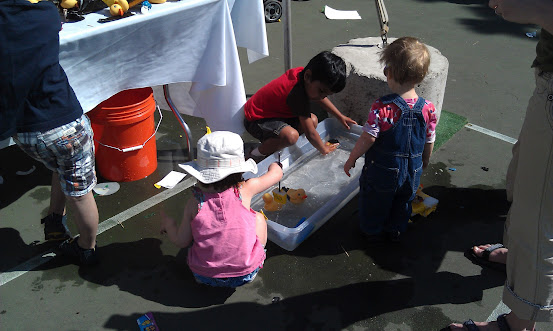 Rather than presenting them with a blank slate, I put together some modules that represent different propulsion types.

I created a fan unit from a toy motor, a AA battery box (with switch) and a fan propeller sold as a spare for snap circuits. I also had some playmobil underwater motors, and lots of Duck(!) tape (especially yellow).

As kids strapped on the motors, and found the ducks tipping over,  presenting an engineering challenge! I also had some closed cell foam (from packing materials) that they could use for floats, and outriggers.

I was thinking that this was a good test to see if I should spend any more time on this, and I think the answer is yes!

These ducks have legs!