As a new member of Wyolum.com, I’ve been pitching in on their (our?) I2GPS project (Now available for pre-order!).

Wyolum has a terrific LED array board, originally intended to build word clocks, but Justin and others have also built a large format digital clock/timer display out of several of these boards, and the Super Accurate GPS clock will make it a terrific Race Clock.

I wanted to test out some GPS modules from an Asian source, and I felt that whatever Arduino code I had time to write was bound to be incomplete, so I decided to use the manufacturer’s PC progam.

We’re using the Fastrax UPS501, and the software is called Fastrax Workbench. The UPS501 is a terrific module, very sensitive (gets a good fix and tracks 9-10 satellites from within my house!) The reason Justin and Anool picked it, though, is that it has a 1 PPS output. This one Pulse Per Second can be used to get microsecond accuracy by lining this up with the GPS time as well.

Although it’s trivial, I thought I’d share how I used Dangerous Prototype’s Bus Pirate to hook up the GPS module to a PC for testing.

Since the UP501 GPS module communicates via TTL Serial, I wanted to use the Bus Pirate in “Transparent UART Bridge” mode. 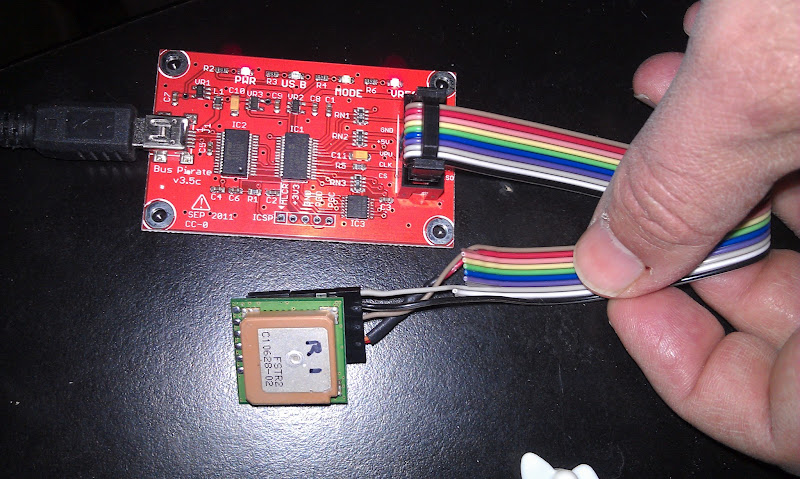 I used this pinout chart to determine what was needed: http://dangerousprototypes.com/docs/Common_Bus_Pirate_cable_pinouts

The bus pirate talks at 115200 baud. connect with your favorite terminal program (I’m using Teraterm Pro). Here’s the transcript of the commands to set it up (the semicolon and the comment following are not to be typed)

Then it will start spitting out NMEA sentences

Exit the program and fire up FastTrax Workbench. The only tricky part here is to select the correct baud rate. Since the Bus Pirate talks to the host at 115200 Baud, and the GPS at 9600 baud, we use 115200.