For the third year, our family entered in to the mad-crazy collaborative experiment that is  the Friday After Thanksgiving Chain Reaction at MIT in Cambridge. I think the main idea is to create, and not consume, and I love not only being there with my family creating, but also seeing the brilliant creations of everyone else.

As usual we weren’t super prepared (even th0ugh I spent most of the day on Thursday building) and spent almost till the last minute preparing and fixing, and our run wasn’t without the “Hand of God” helping it along, but it was fantastic!

I didn’t get very many pictures, but I’ll tell you about what we did. 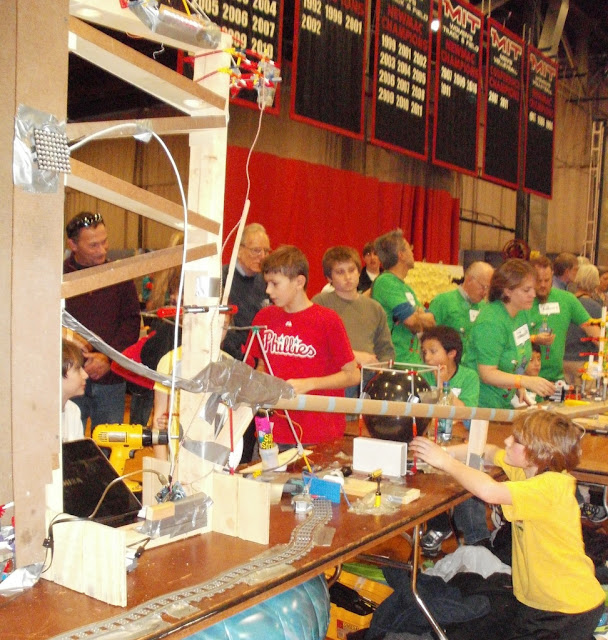 The event is emceed by Arthur Ganson, artist in residence at MIT, and Mechanical genius. He has a whole room of his sculptures at the MIT museum, and it’s worth a trip just for that. He also generously helps people out, encouraging everyone, and builds the final link with some sort of theme. This year (the 14th) the theme was Sonnets, and his final piece dropped ostrich feathers one at a time with lines from a sonnet he wrote (it was beautiful!)

Each link is triggered either by a string pull or a golf ball entering your contraption. This year we decided to go for the additional challenge of the golf ball for the first time. We reused a ball run I made for last years event, and added an elevator for the ball made out of Knex.

Our neighbors contraptions put ours to shame, both in terms of mechanical cleverness and overall finish. The one before us was an elaborate mechanism that shuttled brightly colored golf balls along a track to fall into a bucket, the weight of which eventually powered a putter to put the travel ball on to our section.

I encourage everyone to come and to build! It happens every year, and it doesn’t take much to participate (some links are little more than domino runs) and it certainly gets you away from the shopping crowds into a much better crowd!

Afterwards, we hung out in the empty gym and flew our new Air Swimmer

(which I highly recommend!)