The DangerousPrototypes Blog had a quick post on a deal that Texas Instruments was offering a Watch/development kit for their low power processors for only $24. I’ll be telling you more about this in a future installment, but while I was grabbing the deal, I saw this neat little development kit for their low-power value-line processors. It cost all of $4.30, includes two processors and all the tools you need to get going. 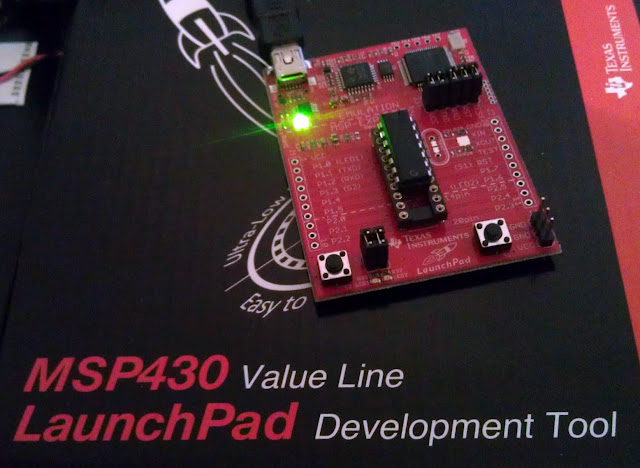 First, while this is an extremely cheap USB enabled development board, this is NOT an Arduino. It is however, an excellent way to introduce yourself to real “on the metal” microcontroller programming.

I downloaded all the tools, and visited their site for pointers to example code, etc.

First, TI is really trying to do the community thing, with a wiki, and featuring other people’s content.

They also have a curated portal that has links to some really cool projects too at :

They also have a really good, structured workshop with videos and labs to really give you an overview of the platform. So far, I’m about a third of the way through the workshop, and I’m really impressed so far.

Installing Code Composer studio took a long time. It needs work on it’s installer code, as it gave all sorts of scary warnings about User Account Control in Windows 7, but in the end it worked out fine.

This eclipse based tool is TI’s flagship micro development platform and is usually licensed for a $500 or more. This
free version limits you to 16 K of code, but that’s about the biggest device in the MSP430 value line.

These processors feature super low power features. In fact the other thing I bought, the chronos watch development platform uses the same line of processors. I won’t go into all the modes here (covered very well in the workshop) but these processors know how to sip power! We’re talking microwatts or less.

The MSP430 processors feature an extremely flexible clock architecture. This allows you to do all sorts of clever things, using different clocks for different parts of the chip, or even driving external circuitry. I’m just starting to wrap my head around all this, but it’s one of the cool things my fpga friends brag about, and now I can play too!

The Von Neuman memory map (single address space for everything) is much easier to use than the atmel’s harvard architecture. No more PROGMEM weirdness. Of course you still have to be ginger about writing to flash memory (constrained to write in blocks in self programming mode the same as AVR’s).

It has pretty advanced analog to digital conversion  with DMA, so you can set it up to transfer directly to memory. Not all the chips have this but many do, and some have fancy compariters to use for pid control, etc.

All in all, I’m very impressed. I think it will be a lot of fun, and a good learning tool. It really isn’t as easy as the Arduino, so I wouldn’t recommend it for “Toe dippers” or folks looking for a quick and easy automation tool.

If they keep offering it at this price though, it could be a great teaching tool. The processors (2!) it comes with are pretty small (both in IO and memory, 2K) so it will be hard to squeeze a lot of Arduino like library in there, but for some small teaching type challenges, it may be good enough, and you can always upgrade the processor for under $3.

A week later, I also ordered the CapSense booster pack, a shield to demo the chip’s built in (no additional hardware needed) ability to handle Capacitive  touch controls. I’ll probably post more about this once I’ve had the chance to play with it.