AlaMode is in stock and shipping now from Makershed and SeeedStudios.

I’m a maker, and as a maker, I love tools. As a computer geek, I’ve long been interested in computer controlled tools. When Riley Porter of Synthetos suggested using AlaMode to control a CNC router from a Raspberry Pi, I was thrilled!

Riley and Alden Hart of Synthetos.com have been developing controllers for DIY CNC machines, and they make the controller for the Shapeoko, the lowest cost DIY CNC router around. They sent me the grblShield that is normally shipped with an Arduino in the complete Shapeoko kit. 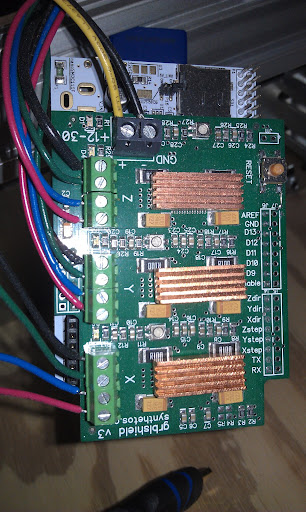 I ordered the mechanical kit from Inventables.com, and then picked up stepper motors and a power supply from some surplus outlets.

This is of the simplest and most rewarding applications of AlaMode. People often dedicate an old computer to their CNC routers, but being in a dusty environment, it can be hard to keep everything running well. By stacking the credit card sized AlaMode, the Raspberry Pi and the GRBL shield, you get a wonderful networked platform for CNC that can be neatly boxed (though I haven’t gone that far yet!) 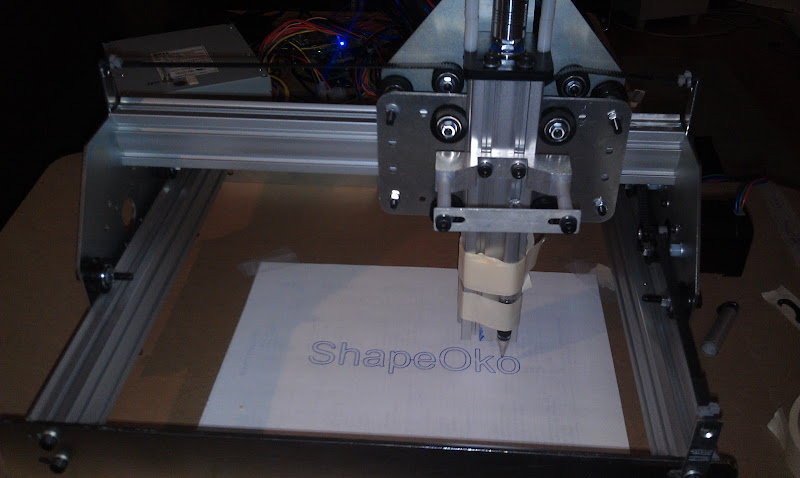 After assembling the Shapeoko, and wiring the motors to the grblShield, you’ll need to program GRBL onto AlaMode. Download the GRBL  optimized for GRBLShield, and assuming you’ve set up Raspberry Pi with the AlaMode version of Arduino, you can program it directly from the command line:

In the next post, I’ll talk about sending jobs to the AlaMode Shapeoko, including over the network!